Initial engineering assessments of the 18 storey holiday inn hotel structure and city centre deemed the structure safe for traditional methods of deconstruction, however, as works commenced, it became evident that this was not to be the case.

With a carpark basement facility, 16 concrete and steel tubular constructed floors and a final two steel framed and copper roofed penthouse and services area, the Holiday Inn had only just finished refurbishments prior to the February 2011 Christchurch Earthquake.

Extensive assessments by Engineers concluded that the structure was safe to work on and based on these assessments, traditional deconstruction commenced with two teams working from the top and the bottom of the structure stripping out internal linings, furnishings and fixtures and the cut and crane of the steel and copper roof structure. A hazardous material survey was conducted during this time to verify no asbestos or other materials present within the structure.

To assist with safe access for deconstruction crews, Nikau installed over $NZD60,000.00 worth of propping to the stairwells to provide further structure protection - these could not be saved.

The client also required that the basement remain undamaged from the deconstruction and sited within the basement was a valuable transformer that fed many of the surround properties.

However, shortly after the strip out and retrieval began, the severity of the damage was uncovered and with only the two lowest levels stripped and the roof partially removed, the Holiday Inn was issued with a Section 34 from CERA - deeming it a high risk of structural collapse and no further works could be completed on the structure.

A change of methodology was required and fast to reduce any risk to the surrounding properties.

Twinkle Toes was tracked rolled approximately 1.5km's from her site at the Farmers Carpark on Colombo Street to Manchester Street to immediately start mechanical deconstruction of the structure.

Sequencing of the deconstruction had to be meticulously planned to prevent any uncontrolled collapse of the building.

The result was over 20,000 tonnes of dirty demolition material - concrete,steel, furnishings, soft furnishings, paper, insulation all mixed together and it was through sharp thinking that these materials were screened and processed onsite to reduce waste to landfill - a result which could have potentially cost the Client millions of dollars. 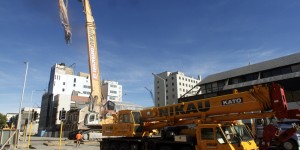 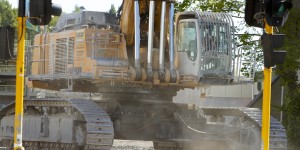 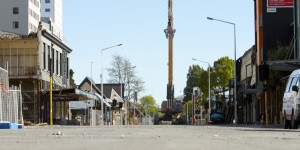 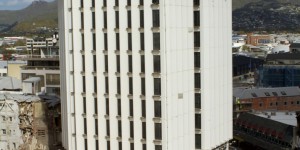 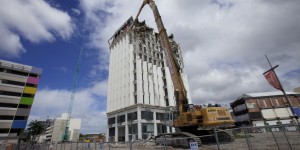 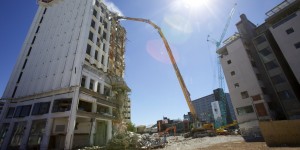 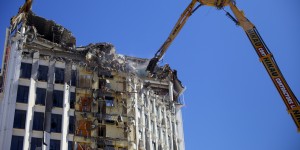 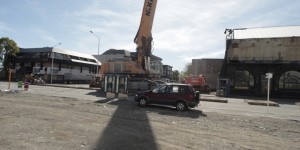